Категория:
Sights Of The Moscow Kremlin 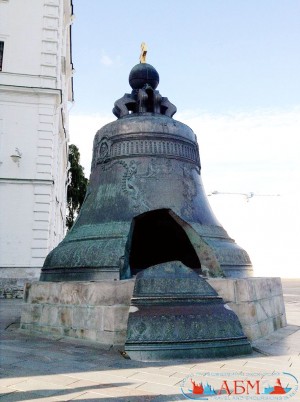 Another Kremlin curio, the Czar Bell, stands on a granite pedestal next to the Ivan the Great Bell Tower. It is the largest church bell in the world, and many think that’s why it is called “Czar Bell.” But in fact, any bell with the image of a Czar was called “Czar Bell” in Russia at the time.

On the two opposite sides of the bell, there are molded images of Czar Alexius I and Empress Anna. Above them, in circular medallions, are the images of Christ, Virgin Mary, the Evangelists, and Moscow Metropolitans canonized as saints. On the sides of the bell, one finds detailed information about how the bell was created, surrounded by a fascinating bas-relief ornament with angel figures in 18th century style.

One of the inscriptions informs us that the bell was cast during the reign of Empress Anna, in the year 7241 of the Creation, or 1733 A.D., and weighs 10,000 poods (163 tons). Both pieces of information are incorrect. The bell was made in 1735, and weighs 2000 poods more than claimed. This discrepancy is explained by the fact that the inscription had been carved into the original casting mold, but the first casting failed. The bell was recast again two years later and it came out heavier, but its “birth certificate” remained the same.

On the pedestal, the inscription claims that the bell was stored in the ground for 103 years, and was installed here on 4 August 1836 under the orders of Nicholas I. The same inscription also repeats the incorrect information regarding the year when the bell was cast.

In 1654, when Alexius I was Czar, Patriarch Nikon ordered a very large bell cast, which would become the predecessor of the Czar Bell. The bell, also called “Czar Bell” or the Great Assumption Bell, weighed 8000 poods (upwards of 130 tons). According to some records, the bell bore the images of Alexius I and the Patriarch himself. Anecdotal evidence suggests that
the bell was cast from the scraps of an even older bell, dating back to the reign of Boris Godunov, destroyed by fire. Olearius, a foreign traveler, wrote about the older bell, claiming that in l6l 1, it hung in a wooden tower around 5 m tall, and it took 24 people to rock its tongue in order to make it toll. The bell tolled at major holidays, and to welcome foreign ambassadors. One of the fires destroyed the bell tower, and the bell fell down and broke.

The newer bell also fell down and broke in the Kremlin fire of 19 June 1700.
The giant fragments lay scattered near Ivan the Great Bell Tower for thirty years, amazing all visitors. When Anna, Peter I’s niece, was crowned in 1730, she immediately ordered the bell restored. In her edict of 26 June 1730, she bluntly rounded the "height of the future bell up to 10,000 poods (around 164 tons). No bells of such magnitude had ever been cast before.

The project was commissioned to the French architect and academic Germaine, who had grave doubts about it, but went ahead and made the drawings. A dedicated small foundry had to be built in one of the courtyards between the Chudov Monastery and the Ivan the Great Bell Tower. A pit 10 m deep and 10 m across was dug next to the furnaces.

The first casting failed, but founder Ivan Motorin kept his hopes up. He made his own drawings, adding another 2000 poods to the weight, but unexpectedly died. His son Mikhail performed the casting in November 1735.

Rumor had it that some pious people :hrew gold and silver into the melted metal, including their crosses. The bell stayed in the pit, tanding on a grated support, while engravers rom St. Petersburg worked on the decorations. The bell turned out larger and more xpensive than any other bell before or after.

On Trinity Day, 29 May 1737, Moscow was swept by one its strongest fires, known to historians as “The Trinity Fire.” The wooden roof above the casting pit caught in fire, and burning logs began falling on the bell. Everyone hurriedly started pouring water on the metal, already red-hot. When they put out the fire, it was revealed that the bell now had numerous cracks, and a 11.5 ton fragment had fallen off.

The Czar Bell stayed in its pit for another hundred years or so before Emperor Nicholas I ordered it lifted up to a pedestal in 1835. There were plans to build a new, larger Imperial Palace, and a giant pit next to it would look embarrassing. The project was committed to the celebrated architect Auguste Montferrand, who had already inspected the bell when he first arrived in Russia in 1819. By that time, Montferrand had built St. Isaac’s (Cathedral and the Alexander Column in St. Petersburg. Two attempts were made to lift up the bell, and the second one was successful. On 23 July 1836, it took exactly 42 minutes and 33 seconds to lift the bell up along an inclined board deck to the granite pedestal where it has remained since.